We’ve been trying to get away just the two of us for months now, but something always manages to come up last-minute.

Saturday night we decided to just do it. Tyler had Monday off, I switched shifts with a friend, we booked a hotel, and Sunday afternoon we jetted off after church. We arrived in San Buenaventura (aka Ventura), around 4:30, just in time to check into our hotel, get settled in, watch a wedding on the beach from out balcony, and eat some amazing sea food at Aloha. 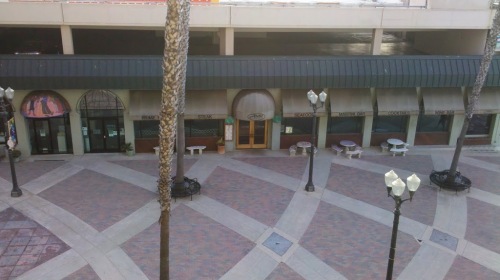 This is the restaurant, which we could see from our hotel room. I forgot to take pictures of my food because I a: was starving, and b:am really new at this. Forgive me?

The food was really good! I had the crab stuffed shrimp, and Tyler had the herb crusted Salmon. I also ordered a tangy Zinfandel, but wound up with a plumy flavored Merlot. The poor waitress seemed to know zero about wine, and was kind of flustered about it, so I just drank it anyway.

After dinner, we took a little stroll down the beach and out onto the pier. It was dark and a bit chilly, but it was beautiful none the less. The moonlight on the water at the end of the pier was magical, but unfortunately we only brought camera phones with us, not actual cameras, so equally as magical pictures were not to be had. Just this sad picture of a sign: 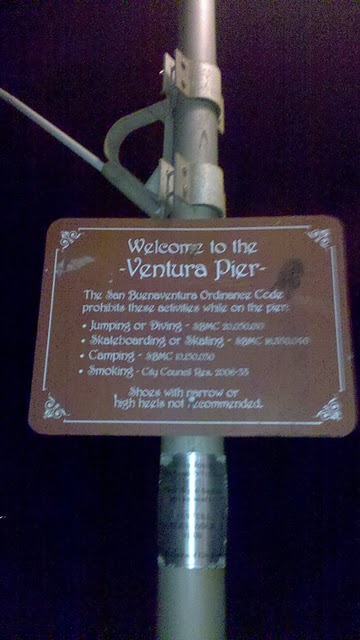 So much for rules three and four. We literally saw a couple of chain-smoking vagabonds not merely camping but living on the pier.

We did, however, get some great pictures the next morning! Our hotel room was tiny, but we had a decent view of the ocean and pier, we were very close to the beach, and our bed was so comfortable that I never wanted to leave. 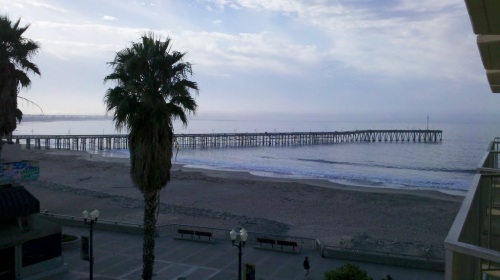 The view to the right of our balcony... 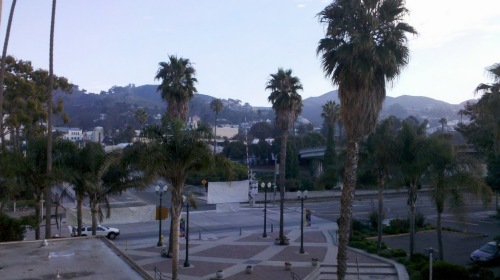 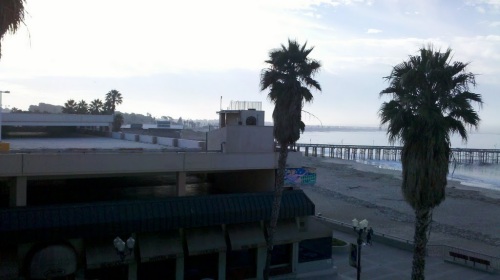 and directly in front.

Some scenes from our early morning ramble along the beach… 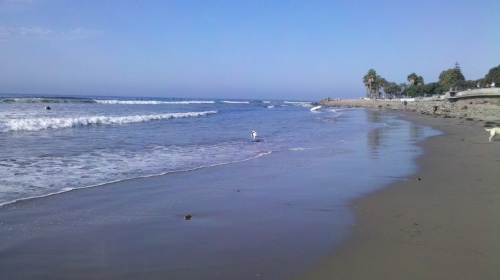 You can't really tell here, but the tiny white dog in these pictures has a life vest on, and he surfed on a surf board like a human. It was really funny. 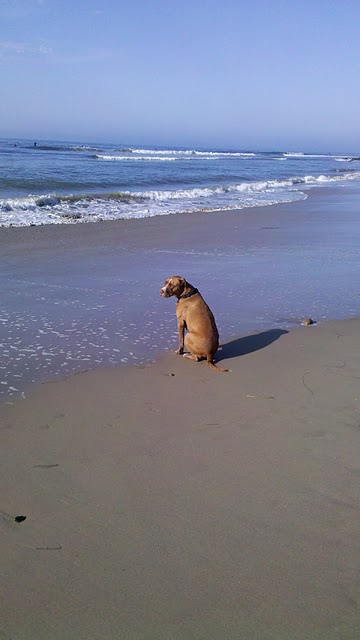 A little friend we made. 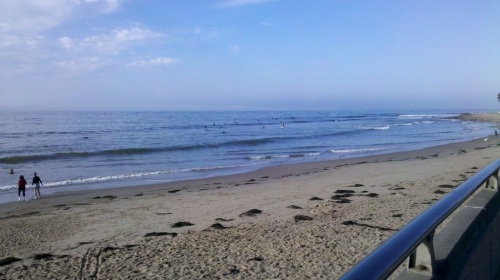 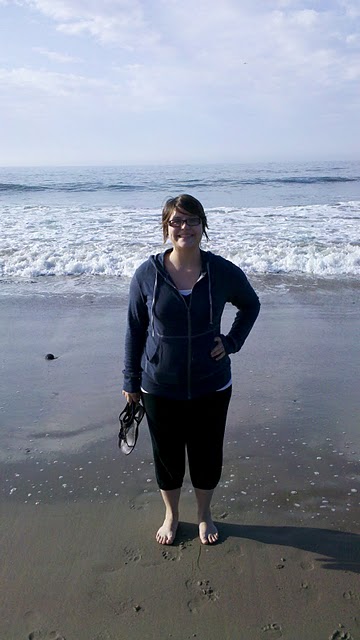 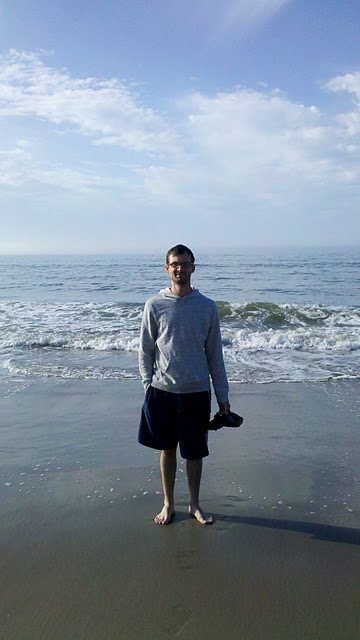 You can tell Tyler was the main photographer because, sadly, this is the only picture I got of him. But I promise he was there the whole time, looking as dashing as always!

It was so refreshing to be out on the beach so early. The sea-salt breeze does wonders for a sleepy mind. There were some surfers, and a few people walking their dogs, but it was quiet other than the sound of the waves.

After our stroll, we decided to walk up to Main Street to the Busy Bee Cafe for some breakfast. Again, I forgot to take pictures like the amature that I am, but Tyler did get this funny one: 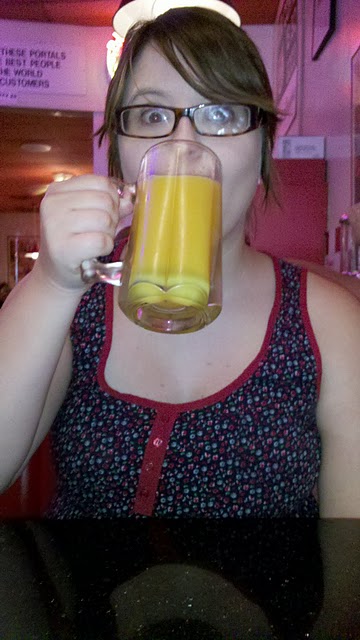 The world's largest mug of orange juice. And no, I'm not wearing a pilgrim hat, that's just a poorly placed lamp.

I got one also, of the mini jukebox at our table: 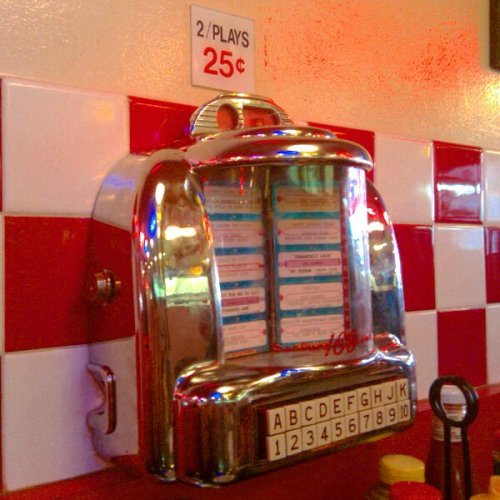 I put in a quarter. My selections: The Unchained Melody by the Righteous Brothers, and This Magic Moment by The Drifters.

The authentic 1950’s decor was really fun, and again, the food was great. I had cheese blintzes, and Tyler had some amazingly fluffy pancakes.

Full and satisfied, we headed back to walk the pier in the daytime: 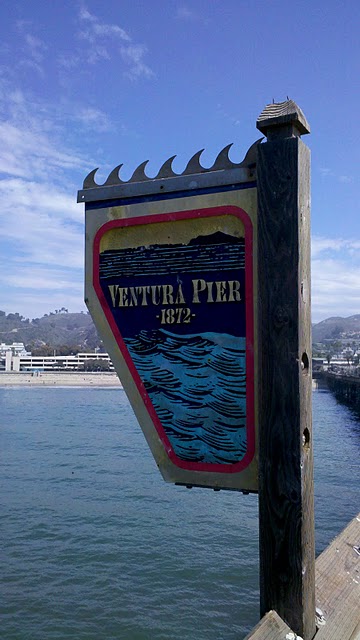 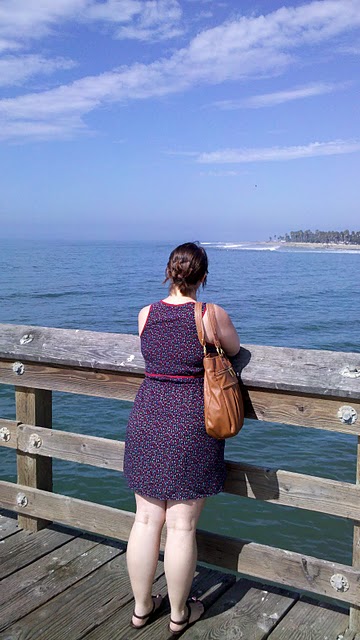 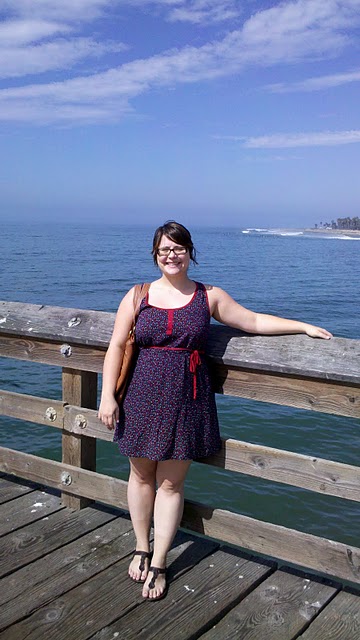 While I enjoyed the view like a normal human being, Tyler took pictures of seagulls and signage: 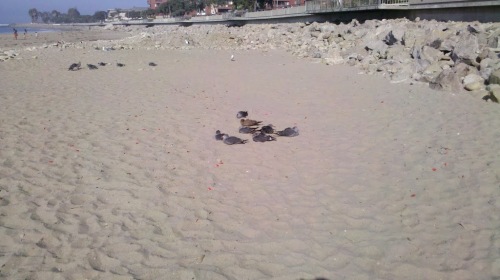 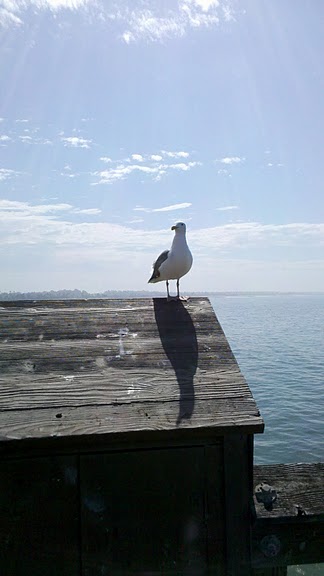 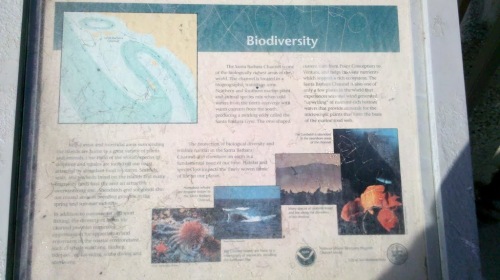 These signs were scattered all along the pier. The homeschoolers in us had to stop and read every one.

After our walk, we packed up and checked out of our room before heading back up to Main Street to explore a little more. We found this really cute book store called The Calico Cat, which, sadly, did not happen to have a real book store cat inside. But we both discovered some treasures: 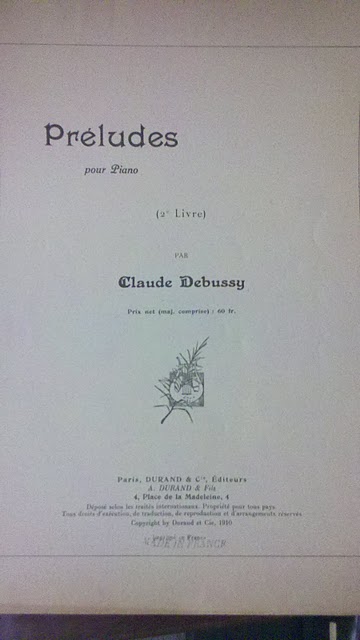 An original 1913-ish French printing of some preludes for Tyler... 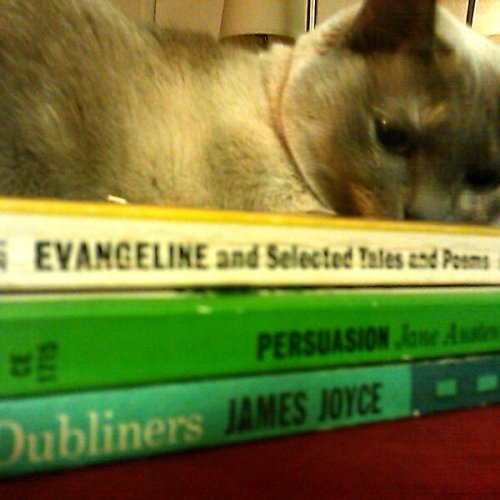 And a few old-ish books for me. (Pardon the cat. I clearly took this picture at home. I tried to move so she'd get out of the picture, but she kept following me, so I gave up. What can I say? She really likes books. )

We also found this cool fountain… 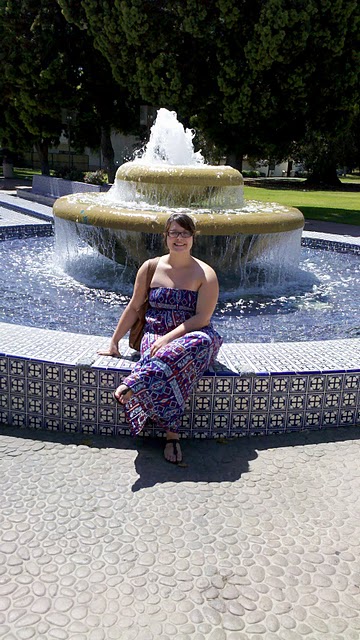 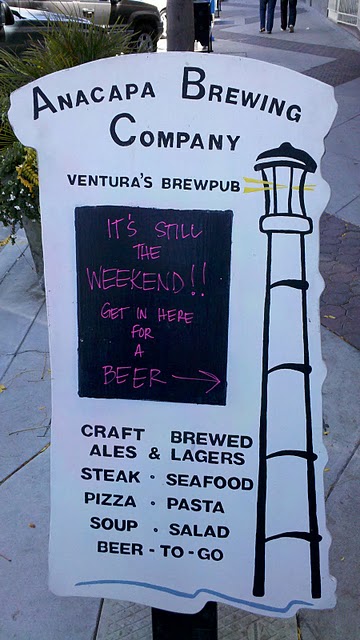 I, yet again, was too intent upon demolishing my meal to remember a picture. I had one of my favorites, fish and chips. The fish was delicious, but the homemade tartar sauce was what really made the meal. Tyler had a pulled pork BBQ sandwich, and, of course, we had a few drinks. 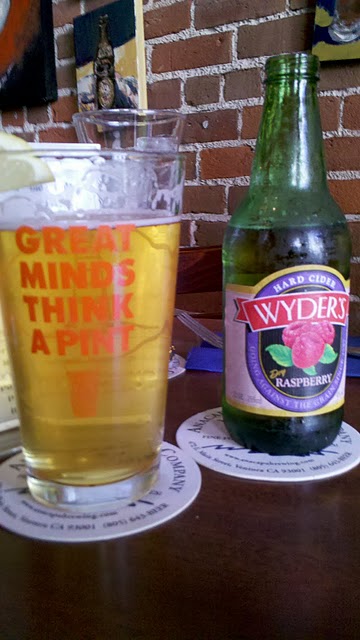 We then decided to cruise down the 1, also known as the Pacific Coast Highway , a little bit just because we weren’t ready to leave yet. We ended up in Santa Barbara, which we really liked a lot. We didn’t go many places, but we drove all over town, and we’ve already decided that we’re definitely going back sometime soon. We did stop for a snack at Rockin’ Yogurt though, and it was delicious. 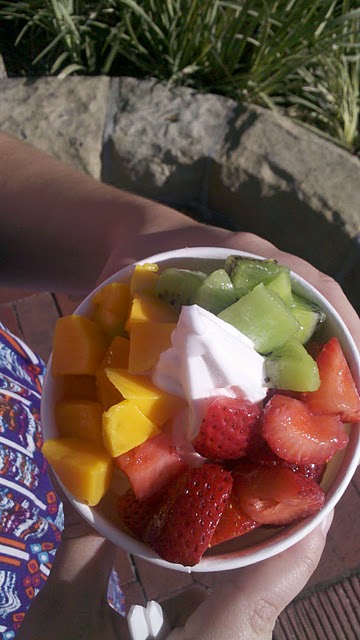 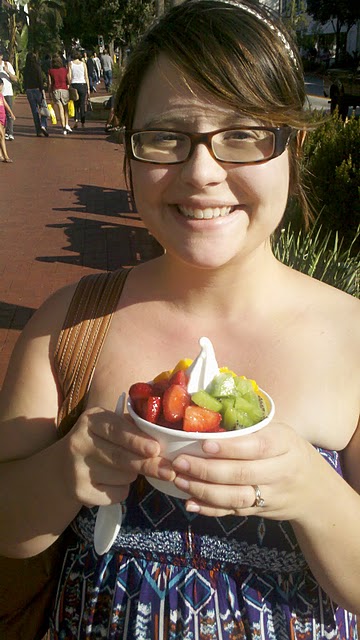 This yummy blend of vanilla yogurt, mango, kiwi, and strawberries made me one happy girl!

And then our tiny vacation came to a close. It was short, only about 34 hours, but it was so good to get away and just be with each other. And I can honestly say that the California coast line is one of my favorite places to visit! 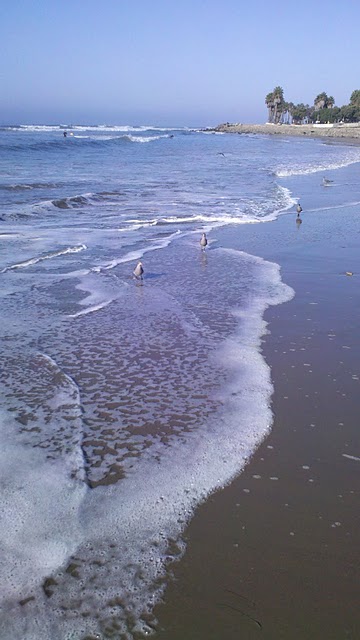 Until next time, Ventura!

2 responses to “A Tiny Vacation”