Weekend Book Review: A Book About September in September

I knew I had to read The Girl who Circumnavigated Fairyland in a Ship of Her Own Making the moment I read the title. I mean, for the love of vocabulary, the author inserted Circumnavigated in to the title like it was no big deal, so I knew it was probably intelligently written. Also, I read a review that mentioned 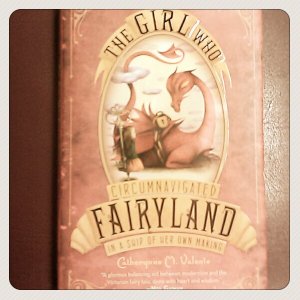 something about a dragon whose dad was a library. I didn’t understand how that could be possible, but this was Fairyland, and I was up for anything.

On occasion (and by occasion, I mean every four or five books or so), I like to read something from the juvenile fiction realm. They tend to be a little less complicated than adult books. You don’t have to navigate a sea of sex and love and other potentially pernicious subjects. They leave those things to the big kids so that the young reader (and I) can have the simple joy of focusing on the story without any messiness. I’m not afraid of the messier things, I just look at juvenile fiction as a vacation of sorts.

Catherynne M. Valente’s first forray into the world of fantastic fiction was a home run. I was delighted by this inventive, intelligent, highly unique story.   It begins without much fan fare: The mischievous Green Wind takes pity on a rather bored Nebraskan girl named September sometime during World War II. He takes her to Fairyland where she is labeled a ravished child, offers to go on a quest to recover a witches stolen spoon, takes up the company of a wayveryn (similar to, but different from, a dragon) who was sired by a library, sings her own death to sleep, sails to the bottom of the world, and has a whole host of other adventures.

September learns a few things along the way, though the tale is never didactic. She learns that although her mother has to spend many long hours working in a factory now that he father is away at war, leaving her young daughter a bit lonely, her mother’s strength is what has taught her to be strong enough to complete this journey. She learns that sometimes, if we’re not careful, we can become what we never wanted to be. She finds her first true kindred spirits and learns the cost of love. And she learns that if you are not a fairy but you eat fairy food in a forest where it is always autumn, you will turn into a tree.

I adored this book. I would recommend it to children and to adults. In fact, if you have some little mini-you’s running about, you might consider reading it aloud together as a family story time book. The narration is witty and amusing, the pace is fast, and with a few simple character voices thrown in, it could be a whole heap of fun. Even if you choose to not read it aloud, I still very much recommend this book.  As I noted before, it is intelligently written and the concept is wholly original. Valente doesn’t ride on the curtails of popular fantasy trends- there are no vampires to be seen here, and no Harry Potter-ish themes. She does not copycat Tolkien, and Fairyland is not a miniature Narnia. Though she makes use of old standbys like witches and fairies and wizards, there are plenty of new creatures to get to know, and the old ones are treated in unique ways. For example, witches can only look into the future, they can’t do magic. Magic, of course, is the realm of wizards, who can only do magic, they can’t cast spells because spells are the territory of sorceresses, who can cast spells but can’t change people into things because only enchantresses can do that, and so on.

But perhaps Valente’s  greatest achievement is that her story stands on its own two feet. Fairyland is very new and inventive, but you get the feeling that Valente knows it as well as you know the house you grew up in. She has sailed its seas and plumed its depths thoroughly, she can walk its hallways in the dark without tripping, and thus being a citizen of the place herself she can now write about it with credibility. I loved it, and I’m betting that anyone with half an imagination will too.

Also, for anyone who is interested, this is what I’m reading this week:

Garden Spells is the newest hit in the magical realism realm (a la The Time Traveler’s Wife), and Mennonite in a Little Black Dress is the memoir of a woman who, due to a series of unfortunate events, has to go back to the Mennonite community she left long ago, and the culture clash that takes place. It should be fun! I’ll be back next weekend to report on my literary escapades. Until then, happy reading!

PS: What have you been reading? Anything good I should add to my list?

4 responses to “Weekend Book Review: A Book About September in September”