A Book Review or Two

I read a lot of books. This probably doesn’t surprise most people. I was, after all, half an English major (I’ll explain later, it’s rather complicated), and I work at a book store. And, oh yeah, one of my two hobbies is reading. (The other is scrap-booking, but I feel like such a mom admitting it that I usually don’t.)

I’ve been reading a lot of books lately. Partially because that’s just what I do, and partially because my friend Marissa and I challenged each other to read 52 books this year, but I really want to end up at a nice, even 60. Because you know my little OCD-riddled brain prefers even numbers that are multiples of five. I even eat in even multiples of five, which means that if I’m eating gummy bears, I’ll eat five at a time, but I’ll always stop on an even number. So if I’m going to eat 25 gummy bears, I have to keep going to 30. It’s sick, I know. (Was that really weird? Should I have kept that to myself?)

Moving on past the awkward train-wreck that is my brain…

As a book junkie, I’ve always loved the literary memoir genre. Books about books, could there possibly be anything more perfect in the whole world?! No? I didn’t think so. I’ve read several- The Magicians Book: A Skeptics Adventure in Narnia, The Wilder Life, A Jane Austen Education, but my favorite by far was The Reading Promise by Alice Ozma. Instead of focusing on one author or series of books, Ozma recounts the enormous impact reading together had on her

relationship with her father, and her life, and how she learned that there aren’t may things more important in life than reading. It originated with a promise- Alice and her father agreed that he would read out loud to her every night for 100 nights. But then neither of them wanted to stop. So they didn’t. What resulted was The Streak, a 3,000+ night reading streak that ended only when Alice left home for college.

This touching collection of stories was as much an homage to the father who shaped her childhood as it was to books and the love they share for them, and I really related to her deep emotional connection to both subjects. There were many years of my life when they two things I loved best, though I don’t know if I would have had the insight to admit it, were my father and books. I think a lot of bookish adults, and adults who were bookish children, will be able to relate and even revel in the memory of a time when finding space and time to read was a simpler task, and one of life’s unhindered joys.

I also loved how Alice brought her father’s library work into play. His struggle to keep his elementary school library a warm, safe, fascinating place for kids to explore was moving and timely. Sadly, a lot of education systems seem to be seeing the arts- even the art of reading a good book and exercising the imagination- as less and less important. It’s truly a tragedy, and Alice’s call to all book lovers to unite together and keep libraries alive, and hopefully keep them freely available for all kids, was an excellent way to tie up her book.

So here, publicly, I, Amanda Rene Stroud, promise to keep reading alive! I promise to read often, and to read both to my children and any other little urchins who happen to stray into my house at story time. I promise to do my darndest to pass on my love of reading to the next generation, and I hope you’ll join me. Book nerds, unite!

Achem. Excuse me a second while I regain my composure.

I’d been hearing a lot about this quirky little book with a lot of old-timey, mysterious photos, Miss Peregrine’s Home for Peculiar Children. I even saw it in Target, so I knew it was getting popular, and was probably pretty good, since whoever picks Target’s book selection has surprisingly good discretion and taste. Mostly. They do sell an awful lot of vampire books, but perhaps I’m just one or two generations too far ahead of that trend to truly appreciate it’s scope, and too non-business minded to appreciate how well they probably sell.

But I was thinking about treading Miss Peregrine anyways, when I discovered that the author, Ransom Riggs, is also the author of one of my very favorite magazine 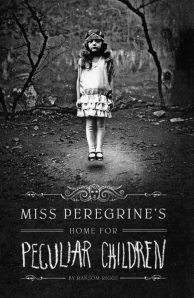 columns: Strange Geographies at mentalfloss.com!!! (I believe it appears in the actual magazine. I’m not certain though, since I always read the articles on their website.) First, I got giddy like a little kid who just had a lot of sugar, and then I did the logical thing and dropped everything I was doing, no matter how important it was, went and bought the book (at Target, of course), and read it in its entirety in just under 24 hours.

Do I even have to tell you what I thought? It was pretty brilliant. The pictures were all authentic vintage photographs, found by collectors at flea markets and garage sales and in attics. None of them were altered in any way. It was creepy, but in the delicious way, not the scary way. The story was also very solid. Imaginative and original overall, suspenseful and absorbing in its development, caring and insightful in its treatment of the characters. And, honestly, the pictures are the creepiest part. It is truly masterful how Ransom weaves the images and the story together, as though they were always meant to be viewed side by side.

The story begins with Jacob and the fanciful stories his grandfather told, which he always believed were make-believe. Then Jacob witnesses his grandfathers bizarre death and starts to have nightmares, seeing visions of horrifying creatures and reliving his grandfather’s stories in a nightmarish dreamscape. His parents are affluent and absorbed in their own problems, but they notice his oddities enough to send him to a therapist. In an effort to exhume his ghosts and hopefully put them to rest, Jacob and his father visit the island where his grandfather grew up in a home for children who had been orphaned during WWII, the place where all his stories supposedly occurred. Jacob discovers the house in shambles, but decides to explore it anyway. What he finds, however, is neither what he expected, nor what it seems.

To find out what it is, though, you’ll have to read it for yourself. 🙂 It’s a fairly easy read, being considered only juvenile fiction, but if you like mystery or adventure at all, I think you’ll be highly entertained. And you can always borrow my copy if you’d like.

Next up on my reading list: The Girl Who Circumnavigated Fairyland in a Ship of Her Own Making by Catherynne M. Valente (another juvenile fiction), One Thousand Gifts by Ann Voskamp (spirituality), and Tolstoy and the Purple Chair by Nina Sankovitch(literary memoir). I’m debating about which adult fiction book I should give a go next. The Map of Time? The Kingdom of Ohio? Has anyone read either of them? Do you have any other suggestions? What else have you been reading lately? Should I check it out?

Okay, friends, the caffeine from my tea has worn off and I’m off to sleep.

2 responses to “A Book Review or Two”